DETROIT, Jan. 9, 2017 - The completely redesigned and reengineered 2017 Honda Ridgeline has been named the 2017 North American Truck of the Year!  Launched in June 2016, the 2017 Ridgeline includes a host of industry-exclusive standard and available features including unibody construction, a Dual Action Tailgate, In-Bed Trunk®, a scratch- and dent-resistant composite truck bed and the world's first Truck Bed Audio System. The 2017 Ridgeline is also the first and only pickup to earn a TOP SAFETY PICK+ rating from the Insurance Institute for Highway Safety, when equipped with available front crash prevention system and LED headlights. It is the second consecutive year for Honda to earn a top honor, with the Honda Civic winning North American Car of the Year honors in 2016. Moreover, this marks Ridgeline's second NACTOY award, the first coming in 2006, when the 2006 Honda Civic also won the 2006 North American Car of the Year.

"This award is a prized validation of the innovations and advantages the Ridgeline offers midsize pickup truck customers and a great recognition of the American development team's work," said John Mendel, Executive Vice President of American Honda Motor Co., Inc. "This is a terrific way to kick off 2017, and we're looking forward to sharing more innovative Honda products in the year ahead."

The North American Truck of the Year Award is given by a group of over 50 members of the North American automotive media and is distinctive because it is not tied to a single publication, radio or television station but determined by an independent group of journalists from the United States and Canada. Presented each year at the opening of the North American International Auto Show (NAIAS) in Detroit, NACTOY recognizes the most outstanding vehicle of the year based on multiple factors including innovation, design, safety performance, handling, driver satisfaction and value.

The Ridgeline is a part of Honda's expanded lineup of innovative light-truck models, including the HR-V crossover, the CR-V and Pilot SUVs and the new 2018 Odyssey minivan that will be revealed later today at NAIAS. 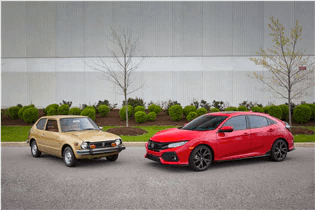 Markham, Ontario (May 23, 2017) - Honda Canada Inc. today announced the retail sale of the two-millionth Honda Civic in Canada since the nameplate's introduction in 1973.  As the best-selling passenger car in Canada the past 19 consecutive years, Civic is a key pillar to Honda Canada's success and accounts for nearly 40 percent of the brand's annual sales.  The Honda Civic is proudly built at the company's manufacturing facilities in Alliston, Ontario, for Canadians, by Canadians.

"The success of the Civic over the years has led to the organic growth of a passionate and dedicated 'Civic Nation'; a community made up of Canadians from all walks of life.  This community may not have common interests or originate from the same place, but it's the love of the Civic that unites them," said Jean Marc Leclerc, Senior Vice President of Sales and Marketing, Honda Canada Inc. "Being built at our Canadian manufacturing facilities and achieving this remarkable sales milestone has certainly cemented Civic's importance in Canada."

The tenth and latest generation Civic represents one of the most comprehensive and ambitious new-model developments ever undertaken by Honda, requiring an unprecedented commitment of R&D resources and Honda engineering prowess.  The result is a perfect marriage of styling, performance and packaging that has continued to build on the model's iconic status.

Civic is Honda's longest-running automotive nameplate and its largest selling model globally. Its Canadian introduction came in 1973, when Civic was heralded for its refined driving dynamics, quality construction and world-class fuel efficiency. The revolutionary CVCC (Compound Vortex Controlled Combustion) engine debuted in Civic and established Honda's place in history as a leader in powertrain innovation. Over the course of ten generations, the Civic has continuously evolved to meet the changing needs of Honda customers in North America and around the world, and has consistently set the bar for fuel efficiency, driving performance and design innovation in an affordable compact-class vehicle.

Honda Civic Quick Facts
• The Civic nameplate launched in Canada in 1973, selling 747 units in its first year.
• Honda Civic sales reached its annual peak in 2008 with 72,463 units sold.
• Cumulative Canadian sales of Civic reached 2,000,000 in May 2017.
• Civic has been Canada's best-selling passenger car for 19 consecutive years.
• Production of Civic (three-door) began in 1988 at Honda of Canada Mfg. (HCM) in Alliston, Ontario.
• To date, more than 4.8 million Civics have been built at Honda's manufacturing facilities in Canada.
• In 2015, HCM became the global lead plant for the tenth generation Honda Civic, marking the first time a global lead plant had been located outside of Japan. This decision was a direct reflection on the more than 4,000 highly-skilled Canadian manufacturing associates at HCM.

Like the previous generation of the small SUV, the 2017 CR-V earns across-the-board good crashworthiness ratings. It is available with an optional front crash prevention system that earns a superior rating and acceptable-rated headlights.

The LED headlights that come with the CR-V's Touring trim earn an acceptable rating. The halogen lights on the model's other trim levels are rated marginal.

To earn the 2017 TOP SAFETY PICK+ award, a vehicle must have good ratings in the small overlap front, moderate overlap front, side, roof strength and head restraint tests. It also must have an available front crash prevention system with an advanced or superior rating and headlights that earn an acceptable or good rating. 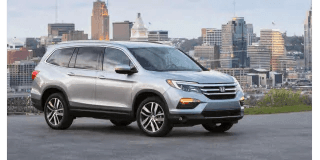 MARKHAM, ON., Aug. 21, 2015 - The fully redesigned 2016 Honda Pilot has received a 2015 TOP SAFETY PICK+ rating from the Insurance Institute for Highway Safety (IIHS) when equipped with optional front crash prevention, bringing Honda one step closer to fulfilling the company's goal to be the first three-row mainstream SUV with the highest available U.S. government (NCAP) and IIHS safety ratings. This U.S IIHS distinction includes a top rating of GOOD in five IIHS crash test modes including a top score of GOOD in the Insurance Institute's stringent small overlap frontal crash test. The 2015 TOP SAFETY PICK+ designation is awarded to vehicles that also have an available front crash prevention system that earns an advanced or superior rating from the Institute. The 2016 Pilot offers an available frontal crash prevention system that earns a top rating of superior.

"The 2016 Pilot is not only the most technologically advanced Honda vehicle on the road today, but the top choice for family SUV buyers interested in safety performance," said Dave Gardner, senior vice president of operations, Honda Canada Inc. "We've delivered to customers the features that will help keep their precious cargo safe while on the road."

Available on Pilot LX AWD trims and above, Honda Sensing™ technologies can help improve drivers' situational awareness with its various systems, which include the Collision Mitigation Braking System™ (CMBS™) with Forward Collision Warning (FCW), Lane Keeping Assist System (LKAS), Adaptive Cruise Control (ACC), Lane Departure Warning (LDW) and Road Departure Mitigation (RDM). These systems benefit from the adoption of a sensor fusion technology integrating the capabilities of a windshield-mounted monocular camera and front grille-mounted millimeter wave radar system to provide enhanced sensing with the ability to identify and anticipate multiple collision scenarios, including those involving a pedestrian. When the system anticipates a collision or road departure, it can initiate warnings and, in certain instances, initiate emergency braking and steering.

Standard safety equipment on all Honda models include Vehicle Stability Assist™ (VSA®) electronic stability control system, Anti-lock Braking System (ABS) with Brake Assist, frontal airbags, side airbags, side-curtain airbags and a front seat design that can help reduce the severity of neck injury in the event of a rear collision. 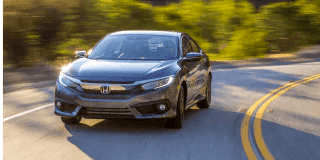 MARKHAM, Ont., November 24, 2015 - The all-new 10th generation Honda Civic was award the Best New Small Car by the Automotive Journalist Association of Canada(AJAC) this morning, recognizing the from the ground up redesign that boasts a sporty new exterior and interior, two new, uncompromising engines , and a host of technological upgrades.

"We're grateful to AJAC for their recognition and the hard work that went into this year's TestFest" said, Dave Gardner, senior vice president, Honda Canada Inc. "The 10th generation Civic is the most ambitious and comprehensive iteration of the nameplate ever. It builds on its iconic status and rich history that has made it synonymous with quality and reliability and dependability that is fun to drive and all of these attributes made the Civic Canada's number one selling car for 17 years in a row."

The 2016 AJAC Canadian Car of the Year Awards "TestFest" was held October 26-30 in Bowmanville, Ontario with over 70 automotive journalists from across the country conducting 1,911 test drives generating more than 110,000 objective and subjective data points throughout the week. According to AJAC officials, the event is designed to provide Canadian consumers with sound, comparative information on vehicles that are new to the market.

About AJAC
AJAC is an association of professional writers, publishers and photographers whose focus is the automobile and the automotive industry. AJAC, a not-for-profit professional organization incorporated in 1981, was established to encourage unity among journalists who specialize in reporting on the automobile. AJAC manages the annual Canadian Car of the Year awards program.

About Honda
Honda Canada Inc. was founded in 1969. It has produced more than seven million cars and trucks since 1986 at its two manufacturing facilities and builds engines at a third manufacturing plant in Alliston, Ontario. Both manufacturing facilities are extremely flexible and currently build Honda Civic and CR-V models. Honda Canada has invested more than $3.9 billion in Canada and each year it sources nearly $2.1 billion in goods and services from Canadian suppliers. Honda Canada has sold more than four million Honda and Acura passenger cars and light-duty trucks in Canada.